About two years ago, I was in a stationery store buying random odds and ends after a very long day when I saw a book peeping from a carton on the floor. I picked it up and quickly flipped through to see book covers with a massive splattering of Devanagari lettering, and so I decided to buy it on a whim. That book was Shantaram Pawar’s Think Visual: A Study in Book Cover Designing.

Even though I had bought it, I never really ended up browsing through it properly till I went for Typography Day this year, and attended Prof. Ghare’s presentation titled “Basic Issues of Language, Script and Design in Typography (in the context of Shantaram Pawar’s Visual Art)”.

Shantaram Pawar is a renowned Marathi book cover designer. He was a student of the Sir J. J. Institute of Applied Arts in Mumbai, where he also went back to teach for almost a decade.

His book Think Visual opens with the Marathi words Chitra Dokyane Kadha, which mean Think and Draw, which are his working mantra. Here are a few gems from the book, and the descriptions (written by Pawar himself) that accompany them: 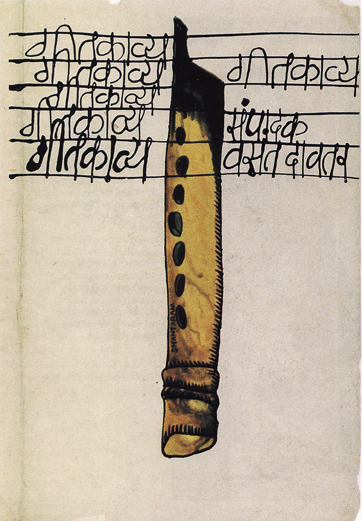 “… To visualize a cover for a compilation of essays on the literary genre ‘Geet-Kavya’ (song poems), I transformed a quill (boru) into a flute. The words were written in calligraphy within the five lines of musical notations. The script becomes thicker and bolder as the boru runs out of ink as the word geet-kavya is being written repeatedly. Evidently, when a writing instrument runs of ink, the ink gushes out uncontrollably... ” 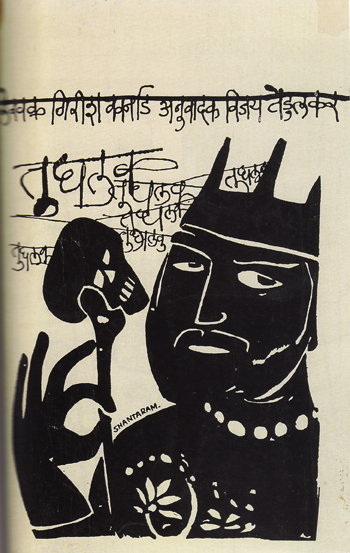 “… depicts the essence of Tughlak’s character – an emperor, in his classical royal pose, with the skull in his hand which is a replacement of the flower. Done in ink, to imitate the etching style, it is filled with heavy black, accentuating the bizarre morbidity. The name of the play is written like a signature that is barely legible, much like Tughlak’s cold and indifferent personality. The signature slants to the left, and to the right, they almost overlap showing instability… ” 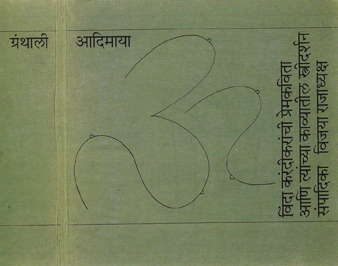 “… Aadimaya is a collection of Vinda Karandikar’s poems of primeval love. The raw primitive flavor of the poems was captured on the cover using images of women’s sumptuous breasts in profile. These curved forms converge to form the primeval sound, the beginning of like, the Omkar… ”